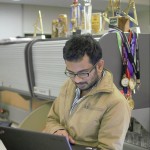 Prior to installation of Lync, Active directory need to be prepared for accepting this new application. There are three major pre-deployment process, which are performed in the active directory level.

Will load four LDF files that can be found on the Installation Folder to your Schema. Schema partition holds the details of the attributes and its accepted values for the application we are going to install.

The forest preparation creates the global settings and all Universal Groups used by Lync Server, also the groups used by RBAC (all groups with CS prefix underneath Users).

Forest preparation then adds service and administration groups to the appropriate infrastructure groups, as follows:

The domain preparation will create additional permissions on the domain in three different places: Users, Computers, domain and root folder container. Bear in mind that the Domain must be prepared only if it will host Lync enabled users and/or Lync Servers.

In order to prepare using PowerShell, you can run the following cmdlet:

Domain can also be reversed, in order to do that we can use the Disable-CsADDomain cmdlet however it only works if there is not a Front-End or AV Conferencing Server active in the domain.