Step by step installation of Exchange 2016

I’ve used Windows Server 2012 R2 servers for both Exchange and Domain Controllers here. Assuming, no prior versions of Exchange have been installed into the lab, and Exchange 2016 will be deployed from scratch. We will be deploying Exchange 2016 using the graphical interface here. There are only two roles in Exchange 2016: Mailbox and Edge Transport. I’ll be doing the mailbox role installation here.

4. Install .NET Framework 4.5.2 on the computer from where we are planning to prepare Active Directory.

When you run the command below to prepare Active Directory for Exchange, you’ll need to name the Exchange organization. This name is used internally by Exchange and isn’t normally seen by users. The name of the company where Exchange is being installed is often used for the organization name. The name you use won’t affect the functionality of Exchange or determine what you can use for email addresses. You can name it anything you want, as long as you keep the following in mind:

Below RTC & CS* groups are created once the step is completed.

The final step to get Active Directory ready for Exchange is to prepare each of the Active Directory domains where Exchange will be installed or where mail-enabled users will be located. This step creates additional containers and security groups, and sets permissions so that Exchange can access them. 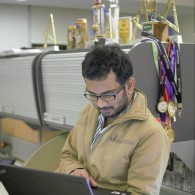 Requesting and assigning a new certificate in Exchange 2016